You, I call friends

Having loved His own who were in the world, He loved them to the end. (John 13:1 HCSB) 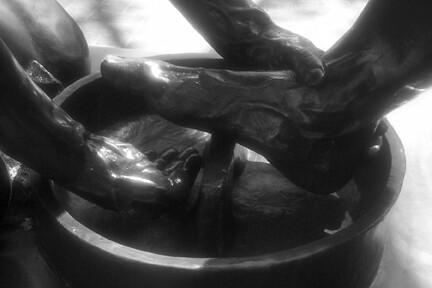 As Peter gazed upon the scalp of the Christ, the head bowed over his road-grimed feet, and  felt the carpenter’s fingers carve the dirt from his toes, the rasping of the towel, he partook of the body and blood of the Lord. John’s account of Jesus’ final night with his disciples is striking for the way he substitutes the synoptic account of Jesus’ breaking and sharing of the bread and cup, with this poignant washing.  “If I don’t wash you, you have no part with Me.” (John 13:8 HCSB)

The one who kneels here, the outstretched arm of Yahweh, the incarnate omnipotence, is the figure of the Lord as Servant. And what he was, in eternal glory with his Father, he will be again, even as he hangs between heaven and hell: the Servant as Lord. But perhaps most mysterious of all, between here and there, he will be friend.

“I have spoken these things to you so that My joy may be in you and your joy may be complete. This is My command: Love one another as I have loved you. No one has greater love than this, that someone would lay down his life for his friends. You are My friends if you do what I command you. I do not call you slaves anymore, because a slave doesn’t know what his master is doing. I have called you friends, because I have made known to you everything I have heard from My Father. You did not choose Me, but I chose you. I appointed you that you should go out and produce fruit and that your fruit should remain, so that whatever you ask the Father in My name, He will give you. This is what I command you: Love one another. (John 15:11–17 HCSB)

This paragraph fascinates and disturbs me. Even without any familiarity with the other Gospels, or the wider narrative of John, we get the immediate sense that when Jesus addresses his disciples as ‘friends’, something happens, it is a phrase pregnant with meaning. He draws attention to this innovation himself: “You, I call friends”.¹

Are the disciples shocked by this, staring at him with open mouths? Are they flattered, unsettled?

If we cast our net more widely through the Gospels, the novelty of Jesus’ language becomes increasingly apparent. Only on one other occasion does he address a group of people as his ‘friends’ (Luke 12:4). In this case, Jesus is addressing a crowd of many thousands and the usage is primarily rhetorical, there is nothing of the personal intimacy we find in this drawn out farewell. Certainly, there are many other occasions where Jesus is charged with being a ‘friend of sinners’ by his enemies. The intended moral obloquy in the phrase becomes a rich source of irony for the Gospel writers, but it is not a phrase we find on the lips of Jesus himself. Nope, it’s really only here, that we find Jesus with ‘friends’.

¹ The English translations uniformly struggle to deal with the Greek tense-forms in this passage. When Jesus says, ‘I have called you friends’ (v.15), the ‘I have called’ translates a single perfect tense-form verb. Older grammarians argued that this indicated a past state of affairs with ongoing consequences (hence the translation), but recent verbal aspect theory questions this solution. The Greek phrase is ὑμᾶς δὲ εἴρηκα φίλους. The fronting of the pronoun ὑμᾶς is emphatic, ‘You (and not others), I call friends’. It parallels the emphatic ‘You are my friends’ in verse 14.  The perfect tense-form verb is probably also intending to highlight this dramatic moment as it unfolds around them, rather than referring to a past state of affairs. The use of the perfect verb is doubly striking in that the passage continues on with a series of aorists: I made known to you, I chose you, I appointed you. These verbs form the narrative explanation for why Jesus has just now referred to them as friends and will continue to do so.

For God's Elect in Shopping Malls.

Others from Foot washing