When Mary came to where Jesus was and saw Him, she fell at His feet and told Him, “Lord, if You had been here, my brother would not have died!”
When Jesus saw her crying, and the Jews who had come with her crying, He was angry in His spirit and deeply moved.
“Where have you put him?” He asked. “Lord,” they told Him, “come and see.”
Jesus wept.
So the Jews said, “See how He loved him!”
(John 11:32–37 HCSB)

We find ourselves beside another grave. Lazarus’. “See how he loved him!” Come closer… 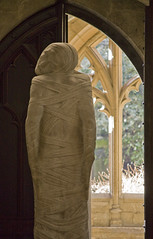 Sometimes we are too overtaken by the heady experience of witnessing Lazarus’ resurrection that we miss the unmistakable connection between this story and Jesus’ final destination. The one who will shortly say, “Greater love has no one than this, that he lay down his life for his friends” begins laying down his life right here. (John connects the two episodes verbally: Jesus speaks of “Lazarus the friend of ours” (Lit.), the only reference to friendship with Jesus other than in John 15:11ff). Jesus’ makes the trip to Lazarus’ grave over the protests of his disciples. It is a trip into the heartland of enemy territory where the Jewish leaders are waiting to capture and kill him. Thomas’ words capture the disciple’s outlook: “Let us also go, that we may die with him.” (John 11:16, NIV).

When Jesus first heard the news he had promised a good outcome for Lazarus, “This sickness will not end in death. No, it is for God’s glory so that God’s Son may be glorified through it.” (John 11:4 NIV) If you’ve been paying attention to Jesus’ talk of glorification throughout John’s Gospel, you’ll know, however, that ‘glorification’ is his way of talking about ‘crucifixion’.

The Son of David weeps, and speaks. Lazarus walks.

On the basis of this miracle the chief priests and Pharisees convene the Sanhedrin and take the final decision to have Jesus killed (John 11:45-54). In coming to the grave of his friend, and leading him up out of it, Jesus signed his death warrant.

With Lazarus we begin to smell the hint of a promise that friendship might return from death. That it might be more than the endlessly anti-climatic experience of David and Jonathan. But as soon as we begin to hope, the friend begins to depart. Jesus announces himself as a friend, in the very movement that he goes to the Cross. Is friendship finished or unfinished by this departure?

Last week I posted some thoughts on grief [http://andersonpost.org/2010/…

[http://www.flickr.com/photos/mnshots/3958700088/]Sometimes, barrelling along the highway…