VII
Dark house, by which once more I stand
Here in the long unlovely street,
Doors, where my heart was used to beat
So quickly, waiting for a hand,

A hand that can be clasp’d no more —
Behold me, for I cannot sleep,
And like a guilty thing I creep
At earliest morning to the door.

He is not here; but far away
The noise of life begins again,
And ghastly thro’ the drizzling rain
On the bald street breaks the blank day. 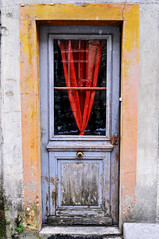 I can’t read these lines without picturing Alfred sitting on the cold steps of his dead friend’s terrace house. The chill rising up through his buttocks as he scratches these lines into a notebook by the gray morning light. To read In Memoriam is to inhabit Alfred Lord Tennyson’s world of grief. Over the course of seventeen years, following the death of Arthur Hallam, Tennyson sort to capture and render every detail of his experience of loss. The mechanical poetic form was a way to discipline and contain his sadness.

But, for the unquiet heart and brain,
A use in measured language lies;
The sad mechanic exercise,
Like dull narcotics, numbing pain.
(Stanza V, In Memoriam.)

In a sense, the dead Hallam became his constant companion, a friend-shaped hole through which he came to know the world, death, and ultimately God.

CXXIX
Strange friend, past, present, and to be;
Loved deeplier, darklier understood;
Behold, I dream a dream of good,
And mingle all the world with thee.

I wonder if friendship is the kind of thing we only really come to understand when the figure of our friend has begun to recede into the distance? As I think over my experiences of friendship, that certainly seems to be the case. Which is to not say (importantly), that there is no genuine experience of friendship, but rather, that ‘being friends’ is not something we tend to spend much time thinking about until our friends are gone. Friendship is something known in hindsight, longed for in anticipation, but that tends to efface itself in doing. Isn’t this the implication of Jesus’ difficult saying: “Greater love has no one than this, that he lay down his life for his friends?” (John 15:13 NIV) The friend will be known in the death of the friend, when the friend is no longer?

I began this series a very long time ago. It will probably run for a while. Image by Tambako

I watch the girl on stage. The spotlight is away from her,…